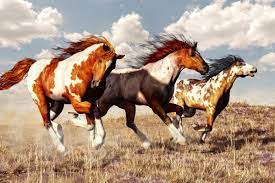 Out of more than 350 horse breeds we have listed only a few that stand out as best & popular. Below are the six particular breedsthat capture the hearts of horse lovers.

Arabian Horses are a specific horse breed known for their beauty, spirit, and athleticism. They are often used in racing and other equestrian sports. There are many different types of Arabian horses, and they can be found worldwide. They are known for their endurance, speed, and agility. They are also considered to be brilliant animals.

In modern-day America, Arabian horses are not as common on racetracks as Thoroughbreds or Standardbreds; however, they remain a vital part of the sport. They are prevalent in Western and endurance racing. They are often used on the Arabian circuits, of which there are many. Arabian horses can be found all over the world, but they tend to do very well in hot climates like their native Middle East. Many of the best breeding farms for them can be found in Morocco, Australia, and America (particularly in California).

Arabian horses are known for their endurance and speed. They tend to be leaner than other Horse breeds, which means that they expend less energy when moving at top speeds. Their lean build also allows them to run faster than many other horse breeds. They often have a high fineness ratio (a measurement used by breeders to indicate the refinement of a horse’s conformation), which is another sign of their athleticism.

Arabian horses are also considered to be very intelligent animals. They are often used in equestrian sports because they can easily be trained to do complex maneuvers. They are also known for being good companions, and they often form strong bonds with their riders. It is not uncommon for Arabian horses to become quite famous. There are many famous Arabian racehorses, both past, and present.

These horses are used in endurance racing, polo matches, and other types of horse races. They are also often seen performing complex dressage maneuvers at shows or exhibitions. One of the most popular uses for Arabian horses is in western riding. They are often used in ranch work, trail riding, and other activities that take place outdoors.

Arabian horses have been bred for their beauty and athleticism for centuries. They remain a popular breed to this day, and they can be found all over the world. They are known for their endurance, speed, and agility, as well as their intelligence. Arabian horses are a vital part of the racing industry, and they continue to serve in that role today.

The average weight of an Arabian horse is approximately 450 kilograms, with its height reaching from 150 to 160 cm. They possess finely chiseled bone morphology with a concave profile and an arched neck. They also have a fine high carried-tail.

One of the most exciting aspects of owning an Arabian horse is the history and culture that surrounds these animals. Arabia is one of the oldest cultures in the world, and the Arabian horse has been a part of their society for centuries. These horses have been used in racing, war, and transportation. They are known for their beauty, spirit, and athleticism.

Arabian horses are known as excellent endurance runners, and they have been used for this purpose for centuries. These horses were especially prized in the Middle East and Europe, where they were often raced into battle. By 700 BC, Arabian horse races had become popular throughout the region. The concept of a true pure-bred Arabian was first developed during this time.

Appaloosa is a famous American horse breed. It is distinguishable mainly because of its colorful spotted coat patterns. Appaloosa horses are also known for their athleticism, intelligence, and good temperament.

The Appaloosa horse breed was created in the 17th century by Native Americans. They crossed Arabian, Spanish, and Andalusian horses with the Nez Perce horse, a uniquely North American breed. The resulting mix was called the Appaloosa Horse.

Appaloosas are used for a wide variety of purposes, including riding, driving, and working on the ranch. They are also popular in horse shows and races. Appaloosas are known for their good temperament and intelligence, which makes them easy to train.

They are used for a wide variety of purposes, from riding, driving, working on ranches to being shown in competitions and races. A distinguishing feature of these horses is their good temperament and intelligence, which makes them easy to train. Owners of this breed say that they are not cheap but worth it because they have many features, including being athletic and intelligent.

The Appaloosa Horse Association (AHA) is the international breed registry for the Appaloosa horse. It was founded in 1938, and today it has more than 60,000 members in over 70 countries. The AHA is responsible for registering horses, issuing registration certificates, recording foals, maintaining records of ownership, and preserving the Appaloosa breed.

If you’re interested in owning an Appaloosa, be prepared to spend a bit of money. They are not the cheapest horses on the market, but they are definitely worth the investment. If you’re looking for a beautiful, athletic, and intelligent horse, the Appaloosa is definitely the breed for you.

American Quarter horse is a famous breed known for short-distance sprints. They have terrific abilities to produce excellent sprints over short distances. They possess a short refined head and a strong muscular body. They also have a broad, powerful chest and rounded hindquarters. They have a good temperament and intelligence. They are considered to be one of the best and most versatile horses in America.

American Quarter Horses are most commonly bay, black or brown. A few are gray, dun, chestnut, or palomino. The American quarter horse is a well-muscled body with a short, powerful neck and broad shoulders. They have very muscular hindquarters, long legs, and large feet that help them to jump over obstacles. The leg of a quarter horse is nearly as long as their neck.

The American Quarter Horse has great instincts and intelligence. They were bred to be cow horses and for use on farms and ranches across America. As such, they can work well with cattle and other livestock, herd them, and protect them from predators. They are also popular in rodeos, where they are used in events such as barrel racing, calf roping, and bull riding.

American Quarter Horses can live for over thirty years. They are a hardy breed that can adapt to a wide range of climates and conditions. They require minimal care and maintenance and can be ridden or used for all kinds of work. The American Quarter Horse is the breed that received the most money in show horse competition during 2012 and was also ranked second in money won at auction.

Quarter Horses have great athletic abilities and were originally used as stock-type horses for ranching. They can be ridden by children and adults and are often seen in rodeos. They are very popular in the western states of America due to their toughness and versatility. The American Quarter Horse is descended from three foundationhorse breeds: the Narragansett Pacer, the Thoroughbred, and English horses that came with settlers to America. Thoroughbreds are a specific breed of horse that originated in England during the 1700s, where they were bred to have a combination of speed, agility, endurance, and strength so that they could run long distances. During the early years of Thoroughbred breeding, English racehorses were sent to other countries, such as France and the United States, to improve the bloodlines of those countries’ horses. Today, there are Thoroughbreds all over the world, and they are used for a variety of purposes, including racing, pleasure riding, and working on farms. 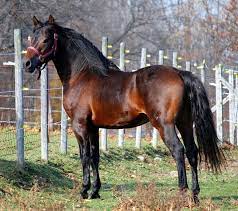 A common breed of horse, the Morgan Horse, is among the taller horse breeds, with an average height of 14.2 hands (57 inches; 145 cm) at the withers. Generally recognized as a fine saddle horse, Morgans possess good dispositions and make excellent driving horses. They are used in modern dressage competition but tend to be on the lighter side, weighing between 900–1,000 pounds (410–450 kg).

As with any equine breed registry, there are differing opinions about what constitutes a “true” Morgan. One point of controversy is that some registries do not permit horses that descend from other draft breeds—such as Percherons or Shires—to be registered as Morgans. This has led to the development of other related horse breeds such as the American Morab and the Canadian Morgan.

The Morgan Horse is known for its gentle disposition and willingness to please. They are also considered one of the most versatile horses, excelling in many disciplines from pleasure riding to horse shows, driving to fox hunting. Morgans have been used in search and rescue, as well as in police work.

Despite their popularity, Morgans are not without their health concerns. Some common problems include navicular disease, Cushing’s syndrome, and laminitis. Like all horses, Morgans should have regular checkups by a veterinarian to ensure they remain healthy and sound.

If you’re looking for a versatile horse that is gentle and willing to please, the Morgan might be the breed for you. With their good dispositions and many talents, Morgans are sure to excel in whatever discipline you choose. So why not consider adding one of these beautiful horses to your stable?

Draft horses are a type of horse that is used for heavy work such as pulling carts or plows. They are usually bred specifically for this purpose and are larger and stronger than other horses. There are several different breeds of draft horses, including the Clydesdale, the Belgian, and the Shire. They are used for a variety of purposes, including agriculture, logging, and transportation.

Draft horses are typically used in place of tractors or other machinery for heavy work because they can do the work with greater efficiency and less damage to the land. They are also able to work in more difficult terrain than other types of horses. Draft horses are an important part of many cultures, and they continue to be used for a variety of purposes around the world. They are a valuable source of strength and labor, and their versatility makes them a valuable asset to any community.

I hope this article helped you with the information you needed regarding different horse breeds.